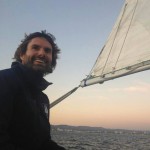 Pat fell in love with sailing in 2003 while living in his home state of California. He learned to sail and quickly began crewing on a variety of boats such as tall ships, and 134 foot brigantines in the Atlantic and Pacific oceans.

Pat is from Berkeley, CA and earned a degree in biology from UC Santa Cruz. This might explain why one of his favorite things about being on the water is seeing wildlife! Patrick has been a sailing instructor, lived on various boats, and owned two sailboats.

When asked what his ultimate adventure would be, Pat would tell you he would like to sail around the world and even cross an ocean single-handed.