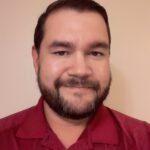 I’ve always had a sense of adventure and enjoy experiencing new places and people. During time in Miami, Florida in 2007 I was introduced to the liveaboard life and caught the bug. During the following years I relocated Ohio, where I joined a local sailing club and started crewing for races and pleasure sails. In 2011, I bought my first boat, a sunfish sailboat, which I sailed all over Sandusky Bay. In September of the same year, I purchased by own boat a 27’ Ericson. That became my home for the next 6 years. From Sandusky, Ohio to Cincinnati, Ohio and then to Ft. Lauderdale, FL and Miami, FL.

While in Florida, I obtained my USCG Captains license and worked as a sailmaker for UK Sails in Miami.  We survived Hurricanes Michael (in the boat yard) and Irma by tying off in a mangrove preserve south of Miami, FL. I even had to scuttle the dinghy. Three weeks after returning to the anchorage, a squall came in while I was away and the anchor line snapped and she was sunk. I returned to Ohio for a time working as a boat mechanic, doing fiberglassing and electrical wiring. During this time I started classes to teach English as a Foreign / second language (TEFL/TESL). Once I completed the certification I relocated to San Antonio and became a Captain and Mechanic for Go-Rio River Barge Cruises.  When time was needed for a change, I reached out to Lake Union Charters & Adventures and was accepted! Looking to have many adventures with this company for many years to come!